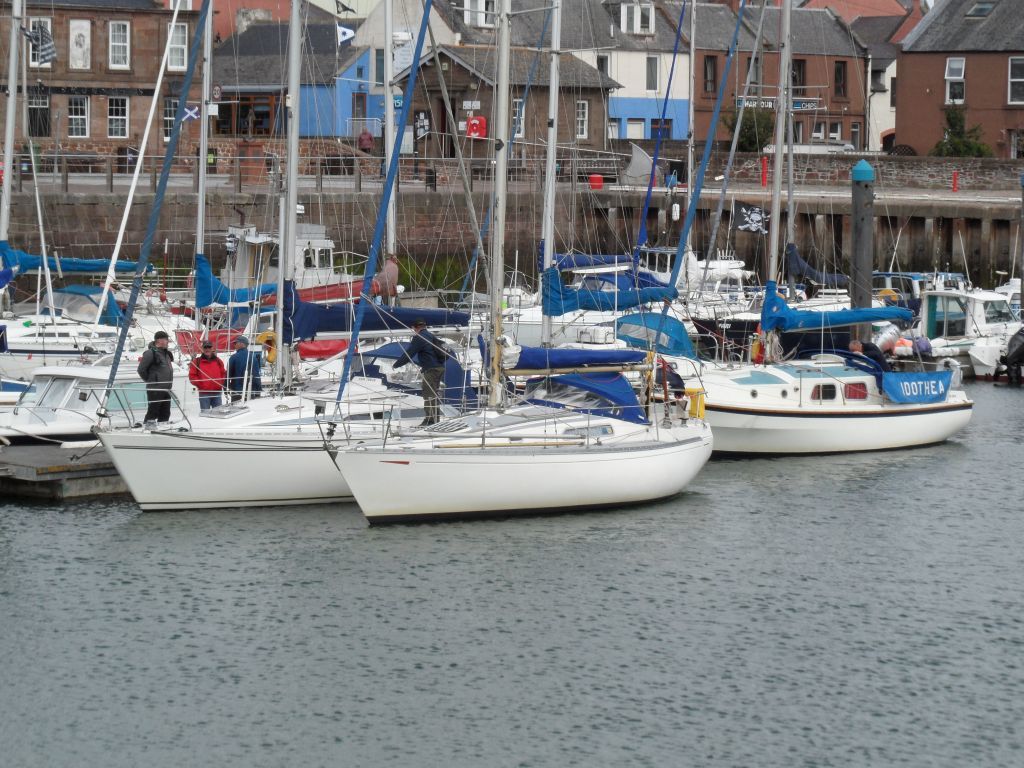 This East Coast Cruise started on Saturday 2nd July, when IDOTHEA (M Griffiths & G Wade) headed off from Granton to overnight at Anstruther. TIDECATCHER (B Robertson, M Harding & R Geddes) and SOLVEIG (S Fowler & N Moffat), having spent Saturday night on the EML pontoon, set off at 6am on the Sunday morning in light drizzle. Luckily this cleared away soon and both boats headed east in light airs, motoring at first, before picking up a westerly breeze beyond Inchkeith which would carry us all the way to Arbroath.

Meanwhile Idothea, having left Anstruther on the Sunday morning, rounded Fife Ness and passed close to the Bell Rock lighthouse before the rendezvous with the other two boats at Arbroath, which we all reached late afternoon having successfully negotiated the minefield of lobster pots outwith the harbour.

Arbroath harbour is a busy commercial fishing harbour but the inner harbour, where leisure craft berth, is very welcoming and fairly peaceful. The one drawback is the nearby fish & chip shop which relentlessly (and no doubt quite deliberately) wafts the scent of its produce over the harbour. Some of the weaker individuals (me included) were powerless and succumbed to the lure of fish and chips for our evening meal. The group then gathered at the boats for an evening 'social', which was to set a pattern for the rest of the week.

Arbroath is a pleasant town, boasting a fine abbey dating back to 1178. It rose to commercial prominence through the flax and jute industries, but when these declined fishing became the main commercial activity. Construction on the existing harbour started in 1838. The town is well supplied with shops, pubs and restaurants.


The Monday was spent by the crews relaxing, exploring the town and making plans for the rest of the week. Tom Wilson motored up from Edinburgh and joined us onboard for a pleasant afternoon afloat.

A cunning plot by Tidecatcher's crew to dispose of the skipper by presenting him with the local delicacy, an Arbroath Smokie, failed miserably, but not before the said skipper spent over half an hour trying to remove a fish bone from his gullet! Why anyone would be tempted to eat one of these villainous offerings, which appear to be made up more of bones than fish, is completely beyond me!

Having made our plans to leave Arbroath late on Tuesday afternoon, the group enjoyed a tour round the Bell Rock Lighthouse Museum on the Tuesday morning. This is well worth a visit. Thus the group departed Arbroath at 15:40 on Tuesday 5th July and headed for Tayport. None of us had ventured into the Tay before, so this was to be an interesting experience for us all.

The River Tay has the greatest flow of water than any other river in the UK and woe betide any mariner who fails to plan his entrance or exit to the Tay carefully and in full cognisance of the prevailing tide and wind conditions. A sand bar at the entrance to the estuary adds further complications and charts warn to avoid the area completely in a strong easterly. We had timed our entrance to the Tay to coincide with the incoming tide and, having passed the fairway buoy, a gentle south easterly breeze carried us safely into the narrow channel.

The navigable channel into the Tay is remarkably narrow, but it is well buoyed. Whilst miles of unbroken water to north and south appear to offer safe sailing, the Gaa Spit and Abertay Sands lie in wait to trap any unwary sailor careless enough to stray off the main channel.

Our passage west into the Tay estuary was made in the warm evening sunshine and it was greatly enhanced by the sudden arrival of a large number of dolphins which splashed, dived and cavorted around the boats for several minutes before disappearing just as quickly as they had appeared. This all met with great excitement on board.

The town of Tayport lies on the south shore of the Tay, approx. 7 miles west of the Tay fairway buoy. The harbour is marked by a curious timber edifice, The Larick Beacon, built in the 1840's and said to be of a design similar to that of Robert Stevenson's temporary accommodation block built on the Bell Rock to accommodate the lighthouse builders.

Tayport harbour is managed by the Tayport Harbour Trust (THT) and a member was there to welcome us and show us to our berths for the night. The Tay Corinthian Yacht Club operates from the harbour, but doesn't own any clubhouse premises there.

In bygone days Tayport harbour was clearly a port of some commercial significance but now, under the control of the THT, the harbour consists almost entirely of leisure pontoon berths. The vast majority of these berths are taken by Tay Corinthian members, but the Trust does welcome visitors, provided pre-booking has been made. We were made very welcome, and our plan was to stay here for two nights.

Tayport is a pleasant town, with ample shops nearby, a good pub/restaurant and a comfortable café close to the harbour. On the Wednesday morning some of us enjoyed a walk to the nearby Tentsmuir Country Park, from where the vast expanse of Abertay Sands (which we sailed very close to the day before) could, at low water, be clearly observed. This was followed by a welcome visit to the Harbour Café. In the evening, and following a couple of pints in Cobbie's Bar, we made our plans for our early departure from Tayport the following morning.

Although westerlies had been forecast for the whole week, the next day forecast had slightly changed, and a south easterly breeze was predicted between the Tay and Fife Ness. This prediction turned out to be correct and we all had to beat towards Fife Ness the next morning, which we rounded approx. one hour after noon.

With the SE breeze dying in the 'Forth the westerlies resumed, but with added venom, and we found ourselves beating west up the Forth in F6 winds (which were not predicted!!) and heavy seas. Heavily reefed and making little progress, we had little option but to down sail and we then endured an uncomfortable 7hr motor back to Granton. Tidecatcher and Solveig made it back to Granton in 13 hrs but Idothea (which had left earlier) had to endure for 16 hrs before finally reaching the sanctuary of Granton Harbour. This was a tortuous and physically demanding passage for all.

All in all, however, this was an enjoyable trip, made in good company, with new horizons explored and new adventures to recount. 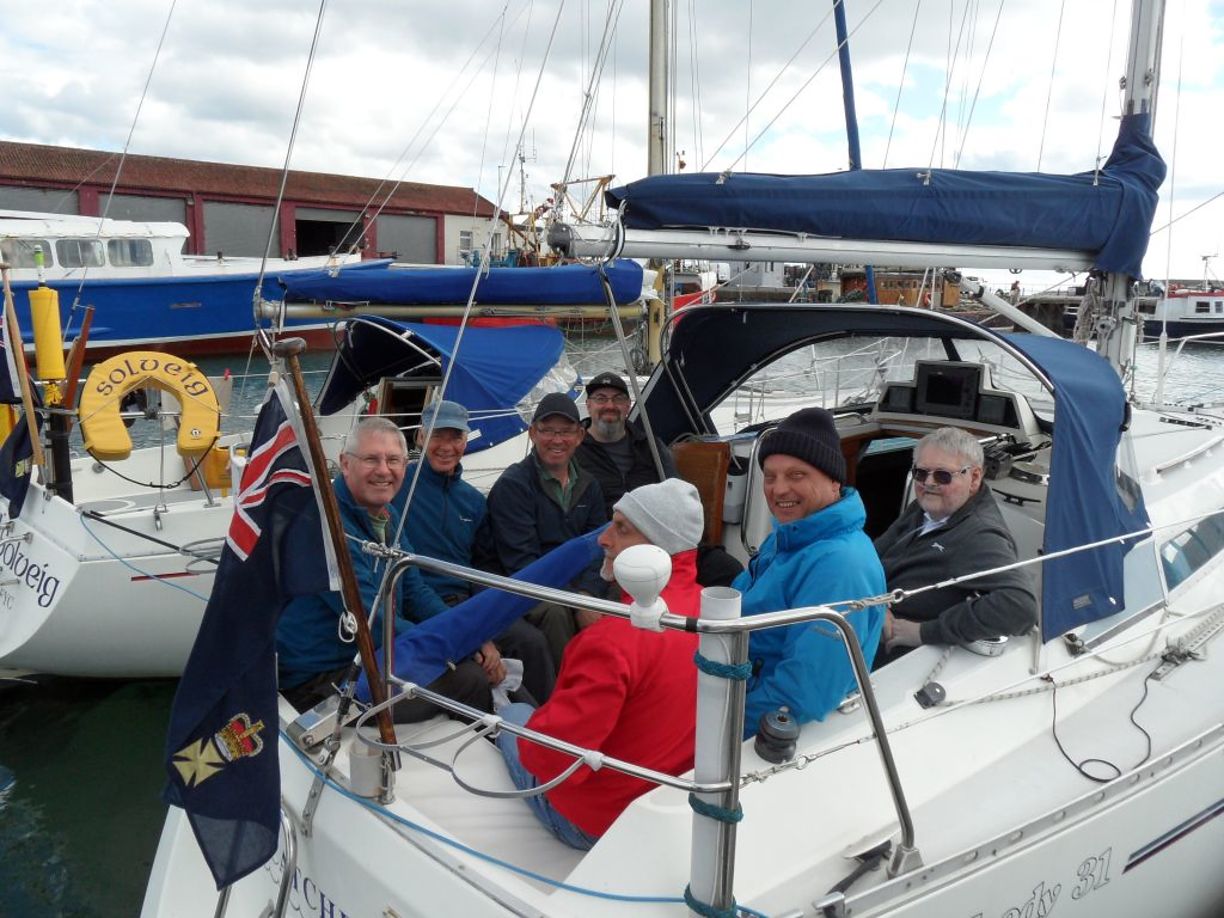 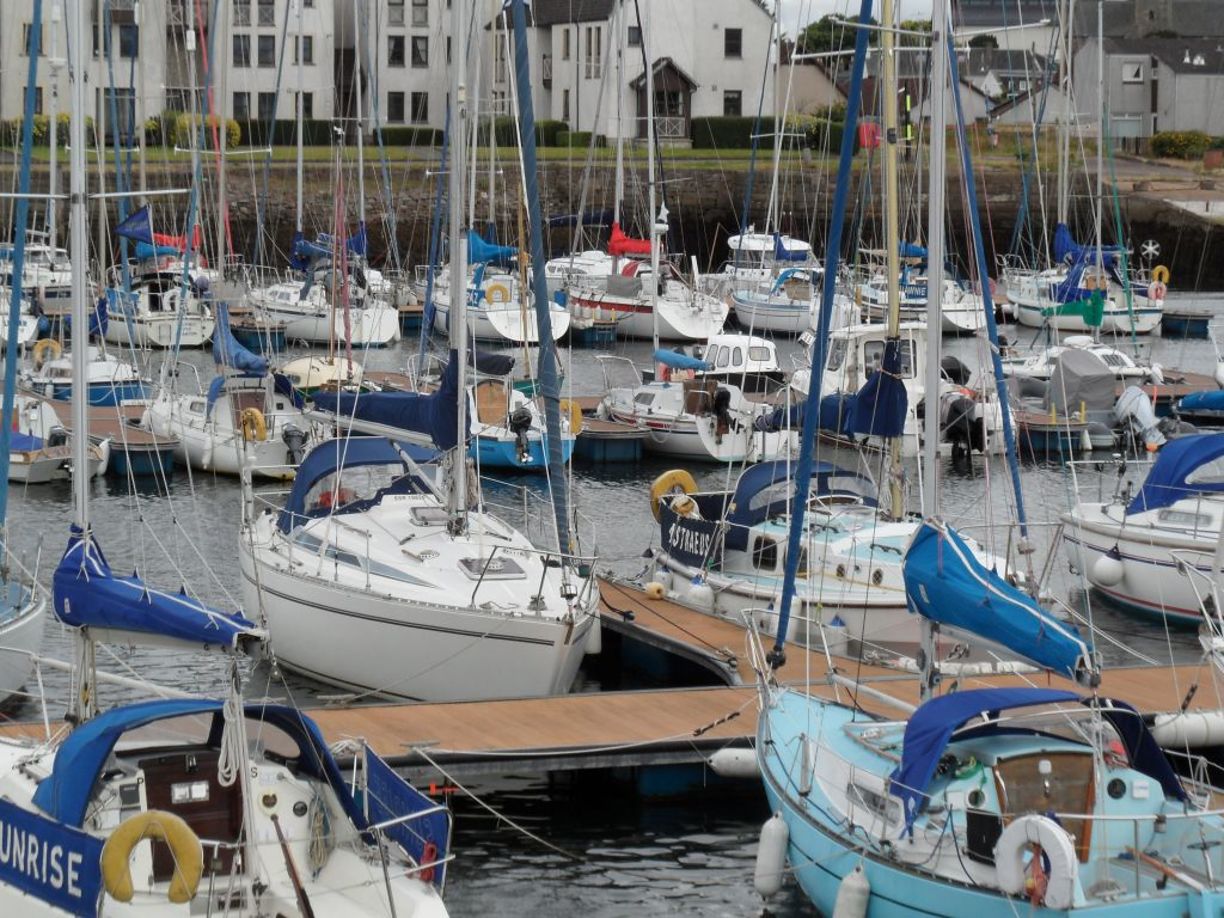